Will ‘no-fly’ zones fly over Ukraine

During a recent news conference, British Prime Minister Boris Johnson was confronted with a plea for establishing a ‘no-fly zone’ This suggestion was quickly dissected and… Read More »

During a recent news conference, British Prime Minister Boris Johnson was confronted with a plea for establishing a ‘no-fly zone’ This suggestion was quickly dissected and discarded, by commentators and the media.  There is, however, an argument to be made that in the face of the massive invasion of Ukraine by Russia’s armed forces, NATO members should and, more importantly, could get creative about how they would be able to establish air cover over Ukraine without triggering World War III.

A no-fly zone was successfully created over Iraq from the spring of 1991 until the American-led invasion a dozen years later. In Bosnia, from 1993- 1995, NATO grounded the once-formidable Yugoslav Air Force. This was again repeated in Libya in 2011.

There are, however, several problems that arise with no-fly zones – i.e. enforceability, effectivity and legality.

No-fly zones, similar to ground-based ‘safe areas’ cannot just be declared, they have to be enforced and protected. This, of course, has not always been the case and has on certain occasions led to tragic results, including the massacre at Srebrenica during the Bosnian War. To enforce and protect a potential no-fly zone in Ukraine, NATO pilots would likely need to shoot down Russian planes or engage Moscow’s mobile air-defense batteries on the ground, a move that could escalate into an all-out war between the Western allies and the Russian Federation. This is something that everyone wants to avoid.

Historically speaking, no-fly zones have not been particularly effective against either helicopters or drones, both of which would need to be neutralized before a no-fly zone could be established. Furthermore, no-fly zones also have no effect on long-range artillery emplacements or cruise missiles. Worse still, they do virtually nothing to stop whatever is happening on the ground. No-fly zonethe would be of no use against a huge Russian convoy of trucks and armored vehicles that have amassed outside of Kyiv. Case in point, Commanding the skies over Iraq after the 1991 Gulf War did nothing to stop Saddam Hussein from launching a ground and attack helicopter offensive against the Shia population of Iraq.

The legality of enforcing a no-fly zone is also not a foregone conclusion. In the cases of both Libya and Bosnia, both were established under United Nations Security Council resolutions. Russia, as a permanent member of the Security Council, will never agree to such a resolution.

There may well be several ways out of the downward spiral in Ukraine, without triggering World War III. Ian Kearns expressed his take on a no-fly zone that would prevent Russia from creating what would likely be Europe’s worst humanitarian catastrophe since the Second World War. Kearns believes that the problem has little to do with NATO pilots having to shoot down Russian planes, but that NATO would have to shoot first. He suggests that the West should turn the tables on Moscow and put forward a solution that would force the Russian military to make the choice that it would shoot first.

During the Berlin Airlift in 1948, humanitarian flights were flown over the Soviet occupation zone in Germany to the airbases and airports in the areas of Berlin that were administered by the Western allies. The Soviet Union made the choice not to shoot down American Air Force cargo planes to avoid starting a third world war. A similar operation could be implemented to assist those in need in embattled Kyiv.

A second, slightly more ambitious plan, would be to use Polish airbases for the Ukrainian Air Force. By making these bases temporarily Ukrainian territory, but surrounded by NATO, Vladimir Putin would have to make a conscious decision to attack the bases by crossing Polish airspace. 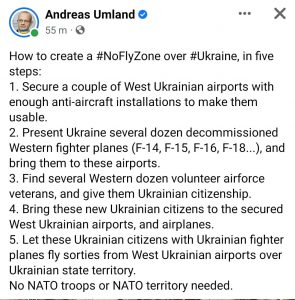 With its unprovoked invasion of Ukraine, Russia has destroyed its effort to build a reputation in the international community as an honest broker. Putin appears far weaker now than it did just a week ago. In the coming weeks and months, Russia’s economy will continue to collapse due to the global sanctions that have been levied on the country, while the heroic resistance of the Ukrainian military and the civilian population, as well as the leadership of President Volodymyr Zelensky, will further galvanize the international community. This will make Putin’s domestic standing more untenable. What’s paramount is how to contain what appears to be a deeply unhinged Putin without provoking him into starting a global conflict.

Will no-fly zones be part of that effort to box Putin into being engaged in a long and bloody quagmire in Ukraine? That is a question that remains unanswered.

EU to coordinate urgent supplies to Ukraine in the energy sector The Handmaid's Tale's O&T Fagbenle Has a Season 6 Theory

There have certainly been a number of twists and turn over five seasons of The Handmaid's... Biden Declares Pandemic ‘Over.’ So What About His COVID&19...

President Joe Biden has declared the COVID-19 pandemic “over.” “We still have a...

Starting a new role can be a stressful time so being prepared is the key. Read our... Bookshelf Styling: A How&To Guide for Upgrading Your Bookshelves...

Are your shelves a stylish, functional contribution to your room or open-faced clutter?...

Tech industry’s massive 2022 layoffs are sign of a ‘boomerang’...

Tech stocks' downturn this year might be a consequence of the sector's lightning-fast...